Sponsored by Beca Airports, the awards were presented at a Mexican-themed event at Wellington’s The Boatshed on Thursday September 28, before an audience of over 100 representatives from throughout New Zealand’s aviation sector.

NZ Airports chief executive Kevin Ward, who also convened the awards judging panel, paid tribute to the high quality of entries across all categories this year.

“We are pleased to recognise the exceptional work of our airport members each year. The awards are an important opportunity to showcase not just the highly-visible work that airports do, but also the way they work with their communities and their airline customers.

“Some of that work can be away from the public eye, but it is essential to keep up with recent exceptional growth, the changing nature of aviation and the relationships that airports build with their communities.”

Awards judges praised the way that Wellington Airport and its customer airlines worked in partnership to deliver a noise management plan for almost 700 home owners close to the airport.

The judges considered the Quieter Homes Programme to be the result of true airport and airline collaboration, with Wellington Airport, Air New Zealand and BARNZ (the association representing the remaining airlines) working together over the better part of a decade, noted Mr Ward.

“Throughout each stage of the process the parties have worked toward the common goal of reducing the impact of aircraft noise on the community, acknowledging the collective benefits of positive community relationships while preserving airport operations,” he said.

The judges were highly impressed with the Airport’s recognition of volunteer and community groups, and the wide span of nominations, from arts and culture to education, health and the environment.

The winning programme was also found to be genuinely regional, partnering with the Wellington Community Trust and five city councils. The judging panel had no doubt the community awards had depth as well as regional coverage, with 30 community group winners at the local level progressing to the award finals hosted by Wellington Airport.

Mr Ward said the judges particularly commended the encouragement of enduring relationships with the volunteer groups and community leaders.

Judges complimented the airport and the wide range of companies involved in the project on successfully delivering a fast track project that was both large and complex.  The project delivered aircraft parking capacity, a taxiway and in-ground infrastructure including fuel lines.

No less than nine construction stages were required in order to tie-in the works with efforts from Airways NZ, Auckland Airport operations, Beca project managers, the contractor Brian Perry Ltd and subcontractors.

Mr Ward said this was a remarkable operational planning and co-ordination achievement, undertaken at the most difficult time of year for construction and delivering essential capacity at a time of high growth.

Judges congratulated the airport on its successful repurposing of space in the terminal to provide a wide range of benefits – both to travellers and the commercial tenants of the terminal – while incorporating themes from local Maori legend and placing the development in the context of a wider property plan.

The airport’s reuse of materials such as ceiling tiles, and reconfiguration of ventilation systems, also showed attention to detail and cost-effectiveness.

Mr Ward said the airport’s commercial tenants, such as rental car companies and the Air New Zealand regional lounge, will clearly benefit from the modern functional premises provided by the airport.

“The judges considered this an excellent example of thoughtful, well-rounded, airport development which will serve the region and the commercial entities on the airport for many years.”

Beca South Island Infrastructure business director Richard Holyoake, who made the awards presentations, added: “It is a real privilege to showcase the achievements of these project teams, often working within challenging constraints to deliver for airport customers and communities. Once again the awards highlight the results that can be achieved working collaboratively toward common goals.”

The awards were a highlight of the NZ Airports Conference, held at the Hotel Intercontinental from Wednesday 27-29 September.

Featuring about 30 quality speakers on a diverse range of subjects reflecting strategic themes for the sector, the event continues to be the key learning and networking opportunity for the airport sector nationally, said Mr Ward.

“About 150 delegates and exhibitors attended this year’s conference – which we believe is a new record – and their feedback has been fantastic,” he said. 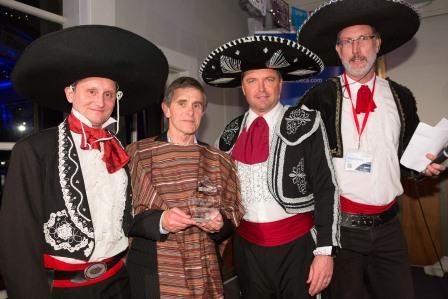