Tomorrow we’ll be announcing the kick-off of Northern Network, our latest infrastructure project. We’d like to share the project details with you ahead of that announcement.

Northern Network is a roading project that will upgrade the main entranceway into the airport, ensuring it continues to get people to, from and around the precinct efficiently and reliably as passenger numbers increase.

From August 2019 you’ll begin to see changes on the roads.

Northern Network is expected to complete by mid-2021.

Auckland Airport is doing this work because by 2044 we’re predicting the airport will be the arrival or departure point for 40 million travellers per year – double the number using the airport today. This forecast growth cannot be accommodated without upgrades to our supporting infrastructure.

We know that any time there are roadworks on busy roads across Auckland it can affect traffic. We have traffic management plans in place and are focused on minimising the impact on road users as much as possible. There will two sealed lanes open in both directions along George Bolt Memorial Drive, just as there is today. It’s essential our site workers are kept safe, so we are asking road users to take care. We also ask people take the roadworks into account and allow extra time when planning their trip to the airport.

From 25 July, you can keep up-to-date with the project by checking out airportofthefuture.co.nz. 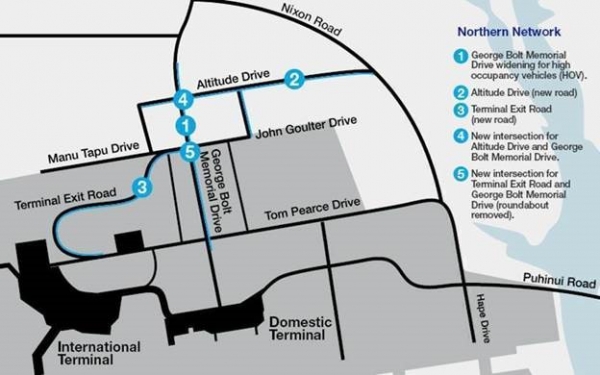 What is Northern Network?

The Northern Network is a project to create a resilient roading network to ensure consistent, reliable journeys for people travelling to, from and around Auckland Airport.

Northern Network is one of eight major infrastructure developments Auckland Airport will begin over the next decade. These major projects form the foundation to deliver the airport of the future.

Alongside Northern Network, projects in the planning, design or construction stages are:

Why are you building Northern Network?

George Bolt Memorial Drive is one of the hardest working roads in Auckland. During seasonal peaks, more than 95,000 vehicles travel along it every day. And that number is expected to grow. By 2044 Auckland Airport will be the arrival or departure point for 40 million travellers and 260,000 flights a year – double the number of travellers currently using Auckland Airport. This forecast growth cannot be accommodated without upgrades to our supporting networks, such as roads.

Below ground, gas, electricity and watermains will be replaced, boosting capacity and providing contingency and resilience to the utilities network. Ducting will be added to ensure future utility and technology demands can be met.

When is it starting and finishing?

Work is beginning in August 2019. While most of the new roads and intersections will be finished by the end of 2020, the intersection of George Bolt Memorial Drive and Tom Pearce drive is more complex and construction work on this part of the project is scheduled to be completed in the middle of 2021.

Will it make people late to work/miss their flight?

We recognise roadworks on busy Auckland streets can be a nuisance for drivers and can affect traffic, and we are focused on minimising the impact as much as possible.

The project team is making every effort to maintain capacity, so during the widening of George Bolt Memorial Drive two sealed lanes will be open in both directions – much the same as it is now.

With the completion of the heavy traffic route, Nixon Road, in 2018 and the introduction of traffic lights at both the Jimmy Ward and Puhinui Road roundabouts, we have added resilience into the network, with increased ability to manage traffic flows. This allows us to prioritise traffic flows during times of peak traffic.

It’s essential we ensure the safety of our site staff and the public, so we are asking road users to take care when travelling through the construction zone. This, along with the need to temporarily reconfigure lanes during construction and road widening, means this part of their journey to the airport may take slightly longer.

We recommend people take this into account when planning their trip to the airport.