An airport is a hive of activity. It is home to many different services and companies that have to work together to get you and your luggage, and air freight cargo, on planes safely.

In New Zealand, we have a range of airports – from busy internationals to buzzing regional domestic airports as well as smaller community airports and aerodromes.

Many of our airports have a long history and heritage. A number of our smaller airports were built in World War II to support campaigns in the Pacific.

To run an airport smoothly requires a lot of hard work from lots of different people – from ground crew to air traffic controllers.

Most of New Zealand’s small and regional airports with scheduled services are owned by their local council. Five of them are in Joint Venture arrangements. These airports are half-owned by the Crown/Government (Whanganui, Taupō, Whakatāne, Westport, Whangarei).

One airport – Milford Sound Airport – is fully government-owned and operated.

We have a few privately-owned airports (West Auckland, Paraparaumu) and one is owned by a community trust (Chatham Islands).

Auckland Airport is a publicly-listed company and Auckland Council is a shareholder (22%).

Wellington Airport is 66% privately-owned and 34% owned by Wellington City Council.

Christchurch Airport is 75% owned by Christchurch City Council and 25% by the Crown/Government.

Who operates at airports?

There are numerous independent companies and agencies operating at airports. The airport does not directly control all the operations. It provides the setting for effective collaboration and co-operation to smooth the passenger’s journey and facilitate efficient airline operations.

Among the independent bodies operating at airports are:

How do airport charges work

The Airport Authorities Act requires all airports to provide financial transparency. All airports must consult with airlines before setting charges – making all relevant information available.

All airport companies with more than $10 million in annual revenue must also consult with their major users before any large development expenditure is approved. The process is fair and transparent. All information is available and fully debated before decisions are made.

Airport charges are a small part of the cost of airfares. 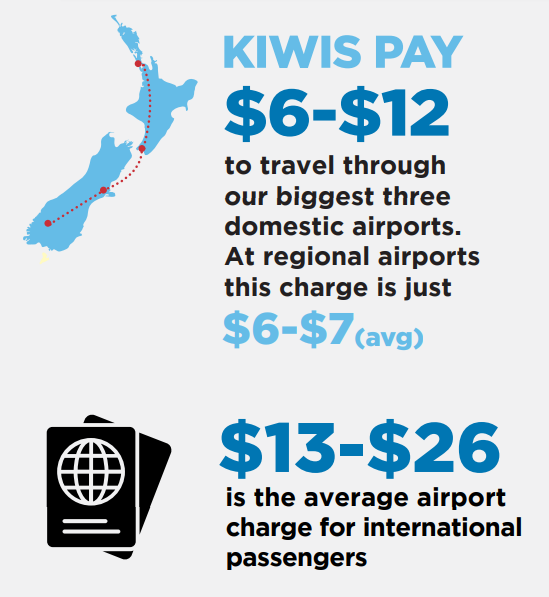 Passengers pay $6-$12 to travel through our biggest three domestic airports. At regional airports this charge is just $6-$7.

$13-$26 is the average airport charge for international passengers.

Drones are an aircraft and operators are regarded as pilots. You must follow New Zealand Civil Aviation Authority Rules when you operate a drone near an airport.

Drones aren't allowed to fly within 4km of an airport or helipad. There may also be controlled or special use airspace which extends beyond the 4km limit.

Visit the Airshare website to learn more about airspace and where you can fly.

This is where you can also request a clearance from air traffic control to fly in controlled airspace.

To learn about flying your drone the right way in New Zealand, check out www.flyyourdrone.nz.

Related Why airports matter Airports of the future